When an 8 year old Josie Masters sees a young Dylan Jones, wearing a red football shirt being led away with a clown at a fair when she is a child, she tries to let people know but it is too late and he disappears.

30 years later Josie is working as a police officer in Bath. The remains of a child’s body is found with the scraps of a red shirt and it looks as though Dylan has finally been found.
Then another child disappears, apparently also taken by a clown.

This is a fast paced crime thriller which twists and turns all over the place and the final few chapters meant I couldn’t put it down. The ending is actually quite scary and Josie is a well written and believable character. A great debut novel!

Thank you to Avon books for sending me this book as part of an Instagram book tour.

Incidentally, I thought it’d be fun to have a clown mask in this picture – DON’T Google “Clown Masks”.  I didn’t have a phobia but I may do now! 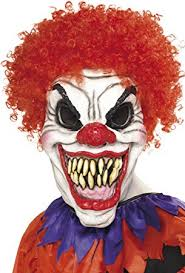 A stack of books featuring women in the title in different guises to celebrate International Women's Day today!
Tagged by the lovely @lovedreadingthis to show my #whitestack and the also lovely @mrscookesbooks to show a #whitespinestack. These are all white books I have read and loved. I do love a white spine...they look so lovely together.
Hoping to get back into posting more regularly now I have my books back on shelves!
Happy Families by Julie Ma is the story of Amy who is 34 and has just
On the blog today is my review for The Authenticity Project by @clare_pooley which is read as part of a readalong from @adventureswithwords.
My bedroom is finished! And I have lots of glorious bookshelves (I've already filled them but let's not talk about that!)