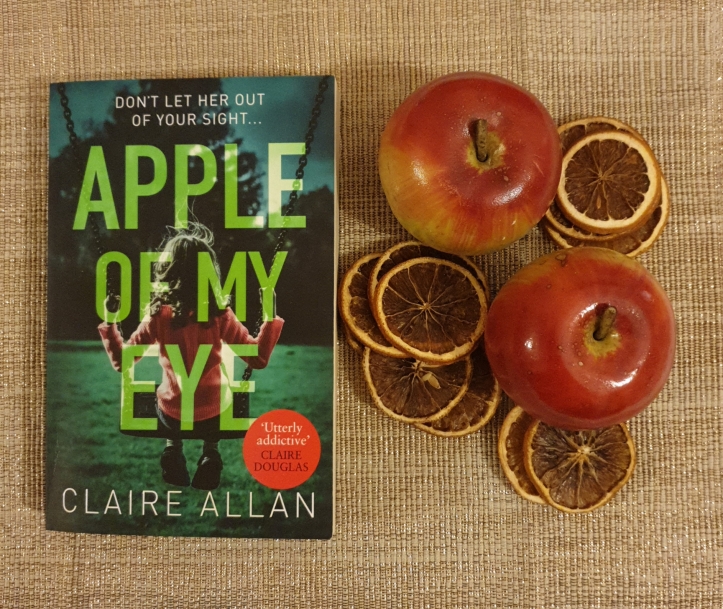 Just how far is a mother willing to go?

This is the second book I’ve read by Claire Allan. I enjoyed Her Name was Rose so was looking forward to reading this. Another thriller, Apple of my Eye is mainly told from the viewpoint of Eliana Hughes, a hospice nurse who lives in her dream home with her husband and is expecting her first baby. She has suffered throughout her pregnancy with severe morning sickness, so when she receives an anonymous note at work, suggesting her husband is deceiving her it makes her worried. When a second note suggests he is cheating on her, Eli finds she isn’t even able to trust her own instincts.

As well as Eli, we hear from Louise, who devastated by the loss of her pregnancies, is watching and waiting. Desperate to have a baby to call her own, she will go to any lengths to become a mother, even if that means taking someone else’s child.

This might be the fastest I’ve ever read a book – less than 24 hours. Luckily I had a couple of train journeys because I didn’t want to stop reading. I felt so desperately sorry for Eli – feeling sick during pregnancy must be awful, she doesn’t feel attractive and so when it is suggested her husband is cheating, it doesn’t take much to convince her. I found it frustrating that she would believe an anonymous note over the husband, but I think that is also perfectly believable and I expect I would do the same! Louise’s story is sad – hearing how she wants to become a mother more than anything is heart-wrenching.

As you’d expect with a good thriller, there are twists and turns aplenty and this book made me gasp in horror, it is really shocking in places. A great read, the sort of book you will fly through because you want to know what will happen next. 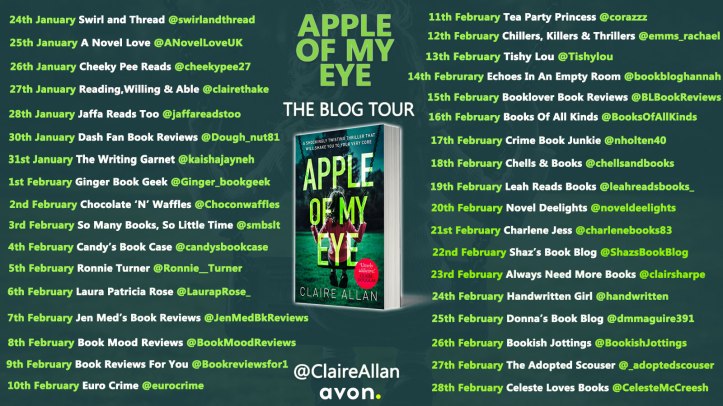 Many thanks to Sabah over at Avon Books for sending me a copy and inviting me to be on the blog tour.

Claire Allan was born on the longest day of the year in the hottest summer on record – the glorious drought ridden 1976, in the city of Derry ~ Londonderry in the North of Ireland.
In 1999 she started working as a staff reporter for the Derry Journal – covering an array of news from politics to human interest stories..
As Claire approached her 30th birthday she decided to give writing books a shot. Basing her first novel ‘Rainy Days and Tuesdays’ very loosely on her own experiences with Post Natal Depression following the birth of her son Joseph in 2004 she wrote a book never knowing if anyone would read it.
Thankfully someone did. It has been followed by Feels Like Maybe, Jumping in Puddles, It’s Got to Be Perfect, If Only You Knew, What Becomes of the Broken Hearted, The First Time I Said Goodbye and Still You.
In 2016 took the leap to become a full time writer, leaving behind her journalism career. She also decided to branch out to write psychological thrillers.
In 2017, she signed a two book deal with Avon Books, an imprint of Harper Collins. Her debut thriller, Her Name Was Rose was released in June 2018, followed by Apple of My Eye in January 2019.
​Claire is married and has two children.