How long can a lie stay hidden?

It’s nearing Christmas and Julianne is preparing dinner when her son comes downstairs, ashen faced, holding his iPad. He has found something dreadful in the family’s Dropbox account. When she sees the files for herself, she is horrified and it makes her question everything about her marriage and what type of man her husband James really is. The story also skips back to 1990 and is set in Oxford University where we meet Holly, a fresher who has an uneasy friendship with a group of friends from a different social circle. Well off and privileged, she isn’t really sure why they are giving her the time of day. Ernest and Ally are brother and sister and James is their friend, and they have all been friends for years. Holly quite fancies James and he flirts with her but before long she realises her has a girlfriend. In the present day, as Julianne confronts her husband about the files she has found, the events of 1990 soon become important again.

I was interested to read this book as a lot of reviewers have felt the need to give trigger warnings (something I don’t usually do in my reviews) but I think it is worth mentioning there is a scene of gang rape which is upsetting. There is also a lot of sex, both heterosexual and homosexual – none of it loving or romantic and also allusions to paedophiles.

All the characters (apart from Julianne’s son Stephen) are thoroughly dislikeable, but that is OK. I thought it was a bit of a slow burner – it takes a while for the section set in 1990 to get going but once it does and the plot starts to fall into place, it is a fast paced read and I really enjoyed it.

Thank you to Sabah over at Avon books for my copy of this shocking domestic thriller as part of a blog tour. 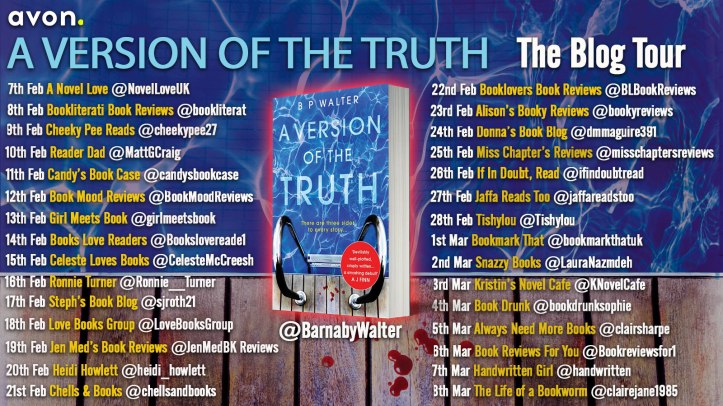 B P Walter was born and raised in Essex. After spending his childhood and teenage years reading compulsively, he worked in bookshops then went to the University of Southampton to study Film and English followed by an MA in Film & Cultural Management. He is an alumnus of the Faber Academy and works as the Social Media Coordinator for Waterstones.

side from writing, reading and tweeting about books for a living, he can usually be found rearranging his ever-growing book collection (every corner of the house is buried under paperbacks) and Instagramming pictures of the titles he’s currently enjoying.

I don't think I've done a #lastnownext post before but I'm so excited about these books! I've just finished The Ends of the Earth which I just loved. I love Cara Hunter's Fawley series and am reading The Whole Truth now as part of a blog tour later this month. And I'm reading The Summer Job next as part of a blog tour in early May and I'm so excited!
Today's #alphastack challenge from @puellalegit of authors I've read is the letter O. Lots of my favourite authors in this stack!
That's my working week done! Tomorrow I am off to @brightonwaterstones to spend my hard earned money on new books.
I'm trying a morning post today as I always seems to run out of time by the evening!
Over on the blog yesterday I posted my review of The Imposter by Anna Wharton.
Over on the blog yesterday I reviewed The Girls from Alexandria by Carol Cooper.