When her twins Alfie and Molly go their separate ways to University, Nadia’s life changes for the better – instead of suffering with empty nest syndrome, she instead becomes a Happy Empty Nester (HEN).  She loves her kids and misses them it but it means she doesn’t have to buy The Big Milk anymore, towels remain on the handrail, the washing machine only goes on twice a week and she can eat whatever she wants, whenever she wants to (with no one criticising her lasagne anymore)!

Not long after, illustrator Nadia meets a new man, Jack and begins a budding romance, the first proper relationship she has had since she split up from the twins dad.  Nadia and Jack meet after a case of mistaken identity in a branch of Lush just before Christmas.  Jack is a loving dad to 14 year old Lori, who runs a charity shop and is exceptionally kind and caring to the volunteers and he and Nadia are a perfect match! Things are going well – Jack meets Nadia’s sister and her family; Nadia meets Jack’s daughter Lori.  They even plan a summer holiday to Barcelona.  Then Alfie arrives home for the summer holidays early and announces he is dropping out of University.  Can Nadia and Jack’s relationship survive having a stroppy teenager around?

I’m going to let you in on a small secret…I have become a little snobby about what I would call chick-lit books.  I read a lot of them when I was younger but I guess as I’ve got older and am more widely read (thanks to Instagram and reading blog posts from other readers) I have left these books behind.  I thought this would be an easy unremarkable 3 star read.  But I was so wrong!

From the very beginning, the book is funny and very relatable!  Maybe because of my age (mid 40s) I understood Nadia’s frustrations with her kids! Mine aren’t quite ready to leave home yet but we are starting to get small snatches of our lives back and I think I will enjoy my later years just with my husband!

Both Nadia and Jack were just lovely people and I was rooting for a happy ending for them.  This is a funny and heart warming story and I ended up giving it 5 stars as I couldn’t fault it at all!  I was sorry to see the story end…in fact I think I want to move to Glasgow and become friends with Nadia and Jack.  Highly recommended!

Thank you to Sabah over at Avon Books for my copy as part of the blog tour. 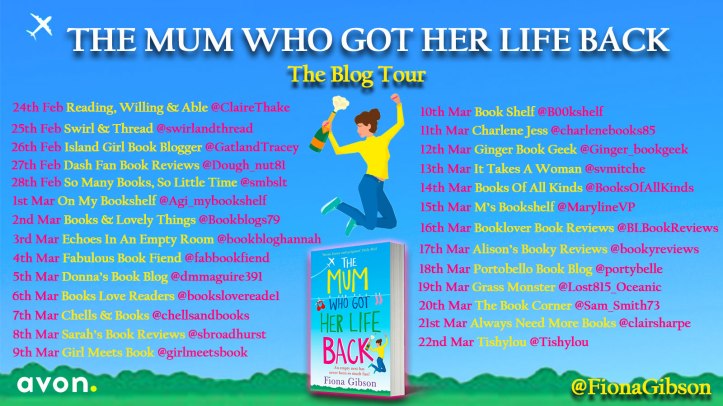 As a self-confessed magazine addict, Fiona started working on teen bible Jackie in Dundee at the age of 17. Originally from a West Yorkshire village called Goose Eye, she spent her twenties as a magazine journalist in London and moved to a crumbling old house in the South Lanarkshire countryside when her twin sons were toddlers.
When her boys left for university, Fiona felt a craving for city life again. With her husband Jimmy and their daughter Erin, she now lives in a flat in Glasgow. She loves to draw, paint, cook and run – usually with her collie cross, Jack (just the running part).