Vox was one of those books that I desperately wanted to read.  I was hoping to pick up an early copy at YALC but by the time I went back to the stand they had all gone.  After a really bad day at work so treated myself to the hardback which then sat on my shelf unread. Does anyone else do that thing where they put off reading a book because they really want to read it?  No?  Just me then…

Then HQ Stories contacted me asking if I’d like to be one of 100 book bloggers tasked with championing this book so I decided to squeeze it in to my April TBR and I am so glad I did as I thought it was great!

Set in the near future the US government, under influence from the religious Pure Movement, decide that women should have no rights – their bank accounts are frozen, they aren’t allowed to work or travel and every female is fitted with a counter, a device around their wrist that monitors their speech.  The female population is allowed just 100 words a day – any more than that and they get an electric shock, getting more and more severe with the more words over 100 they utter.

Dr Jean McClellan lives with her husband Patrick, her 17 year old son Steven, her 11 year old twin boys and her 6 year old daughter Sonia.  We join the story 1 year after the devices have been fitted.  Jean was a cognitive linguist when she was employed, studying aphasia, the loss of language after brain injury.  When the presidents brother has a skiing accident and ends up with brain damage, Jean is given her voice back and asked to go back to work with her former colleagues to try and find a cure, something they were very close to doing in their research before their voices were taken away.

Imagine having only 100 words a day to use – I looked it up and the average person speaks around 16,000 words a day.  And imagine living with people who believe so strongly in the ethos of what they are doing, that they would turn you in if they thought you were breaking the rules.  This is a scary look into a future that I’d instantly dismissed as something that can ever happen.  But when you read the back story in this book and how the author imagines it came about, you realise it might not be quite so impossible after all.

“My fault started two decades ago, the first time I didn’t vote, the umpteen times I told Jackie I was too busy to go on one of her marches or make posters or call my congressmen.”

The story flowed well. Despite not being able to speak, Jean is the narrator of the book and she is thoroughly pissed off.  She doesn’t respect her husband, thinking him weak. Her son Steven has been completely indoctrinated into the Pure Movement and has become her enemy.  Her heart breaks for her little girl who isn’t allowed to use her voice or able to read books and takes pride in the award she wins at school for uttering the least amount of words.  Once Jean goes back to work in her lab, she discovers other more sinister plans the government have but also she also learns of a resistance movement.

My only criticism was I thought the book ended too neatly but I won’t say any more than that as I’d give some plot points away!  However, I love dystopian fiction and I think this will stay with me – it certainly left me feeling distinctly unsettled.  There have been inevitable comparisons to The Handmaid’s Tale but I think it is OK to have done something similar.  Besides women being oppressed, there are enough differences to make this a powerful book in it’s own right.

Thank you so much to Jess Breslin at HQ Stories for gifting me with a copy of this, along with some fab fridge magnets! 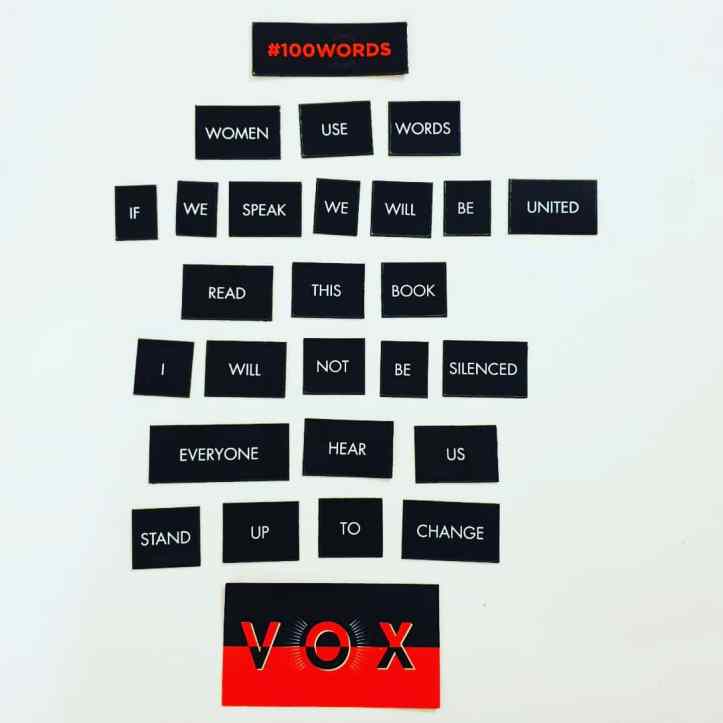 Christina Dalcher earned her doctorate in theoretical linguistics from Georgetown University. She specializes in the phonetics of sound change in Italian and British dialects and has taught at universities in the United States, England, and the United Arab Emirates.
Her short stories and flash fiction appear in over one hundred journals worldwide. Recognitions include the Bath Flash Award’s Short List; nominations for The Pushcart Prize, Best of the Net, and Best Small Fictions; and multiple other awards. She teaches flash fiction as a member of the faculty at The Muse Writers Center in Norfolk, Virginia. Laura Bradford of Bradford Literary Agency represents Dalcher’s novels.
After spending several years abroad, most recently in Sri Lanka, Dalcher and her husband now split their time between the American South and Naples, Italy.

Kicking off the readalong with @tandemcollectiveuk today for Murder on the Christmas Express by Alexandra Benedict!
November wrap up.
Thanks to @oh_apostrophe , I now know that 29 November is Louisa May Alcott's birthday!
I saw the tag #sixbookssixcountries over on @barbaras.book.obsession and thought I'd give it a go!
Some fabulous #bookmail yesterday!
We are up to L in the #alphaactivitystack from @puellalegit and today it is all about LOVE!