Faye and Philip and their daughters Tamsin and Georgia live a comfortable life.  Faye is a model who dreams of success but despite working hard on her body and looks hasn’t hit the big time and as she is in her mid-30s, she is getting worried about being past her best.

Erica has had a sad life – brought up in care after her mother died of a drug overdose, she spies on Faye, watching her from her flat window.  Overweight and dowdy Erica dreams of being like Faye – beautiful, thin and with a gorgeous family of her own.

But Faye has a secret – her life is not as enviable as people believe.  After a one night stand with her husband’s best friend Jonah, she is wracked with guilt and is revolted by what she did.  But Jonah doesn’t want to let her go…

Things take a disturbing turn when Tamsin goes missing after school, taken by Erica who believes Faye isn’t a good enough mother, believing she herself can do a better job.

It took me a little while to get used to how this book was written.  We hear from quite a few characters, all written in the first person in the present tense which was unusual – I can’t recall reading a book written in this way before.  It is a very quick read – sometimes we just hear a couple of lines from a character and none of the chapters are very long.  It was a good way to keep the tension strong.

A tale of obsession and jealousy, none of the characters are very likeable.  Faye is a little self obsessed but is a good mother.  Erica is a little nuts but has had a difficult life.  Jonah, the man Faye sleeps with is just vile – creepy and threatening.  And once Philip, Faye’s husband discovers the affair, he develops trust issues (not surprisingly) and also develops an unhealthy interest in Faye’s movements.

I wasn’t entirely convinced by the ending but overall this was a fast paced and tense thriller.

With thanks to Sabah at Avon Books for inviting me to be on the tour and supplying me with an ARC of the book.  Be sure to check out the other stops below… 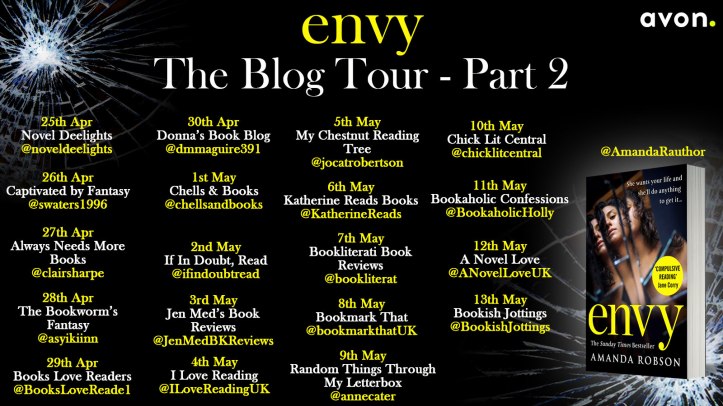 After graduating, Amanda Robson worked in medical research at the London School of Hygiene and Tropical Medicine, and at the Poisons Unit at Guy’s Hospital, where she became a co-author of a book on cyanide poisoning. Amanda attended the Faber novel-writing course, and is now a full-time author. Her debut novel, Obsession, was a #1 ebook bestseller and her second novel, Guilt, was a Sunday Times bestseller.