Your darkest moment is your most vulnerable…

As the book starts, Stephen Berry is about to jump off the Queensferry Crossing bridge into the River Forth.  Struggling with depression and unable to manage his bipolar diagnosis, he feels it is the best thing for everybody to end his life, but a suicide prevention counsellor manages to talk him down.  But just a week later, Stephen is found dead at the bottom of a cliff and DCI Ava Turner and DI Luc Callanach of Police Scotland are sent in to investigate if he jumped or was pushed.

But when other apparent suicides start happening, including a woman found dead in a bath and a man dead after being electrocuted, Ava and Luc become suspicious and realise they have a serial killer on their hands, one who is targeting suicidal people.

Meanwhile, Luc is in hot water after going to visit Bruce Jenson, a man who used to work with his father, one of two suspects who raped his mother and who may possibly be his father.  Jenson is suffering from dementia, so isn’t able to give Luc the answers he wants.  But just hours after Luc’s visit, Jenson is found dead, and although Ava doesn’t suspect Luc, the fact he was there means he is naturally under suspicion.

As usual, these books are pretty gruesome – Fields is quite happy to give lots of detail on the victims and what they went through.  The police procedure is done really well and feels very realistic.  And I absolutely adore the relationships in this book, especially how the friendship between Ava and Luc has developed over the series.  I desperately want them to be a couple and I really admire the author for not giving in and doing that too soon.

This is the 5th book in the series featuring DCI Ava Turner and DI Luc Callanach, set in Edinburgh. I think these books work well as standalones but I think you’d probably get more enjoyment out of them read in order so you can see the relationships develop. Exciting and thrilling, I can’t wait to keep readings this series!

Many thanks to Sabah and Avon Books for my review copy and inviting me to be part of the blog tour. 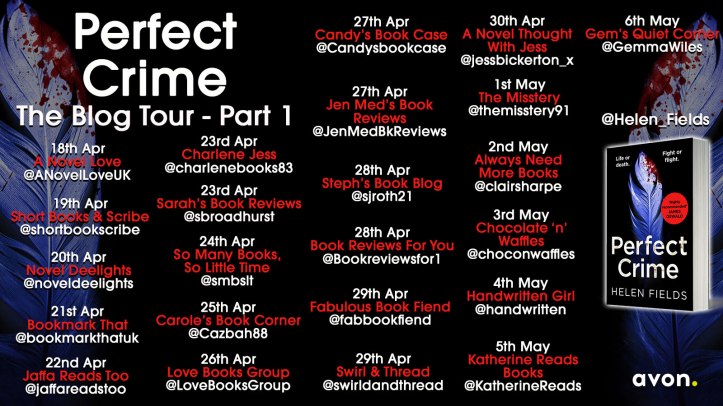 Helen Fields’ first love was drama and music. From a very young age she spent all her free time acting and singing until law captured her attention as a career path. She studied law at the University of East Anglia, then went on to the Inns of Court School of Law in London.
After completing her pupillage, she joined chambers in Middle Temple where she practised criminal and family law for thirteen years. Undertaking cases that ranged from Children Act proceedings and domestic violence injunctions, to large scale drug importation and murder, Helen spent years working with the police, CPS, Social Services, expert witnesses and in Courts Martials.
After her second child was born, Helen left the Bar. Together with her husband David, she went on to run Wailing Banshee Ltd, a film production company, acting as script writer and producer.
Helen self-published two fantasy books as a way of testing herself and her writing abilities. She enjoyed the creative process so much that she began writing in a much more disciplined way, and decided to move into the traditional publishing arena through an agent.
Perfect Remains is set in Scotland, where Helen feels most at one with the world. Edinburgh and San Francisco are her two favourite cities, and she travels whenever she can.
Beyond writing, she has a passion for theatre and cinema, often boring friends and family with lengthy reviews and critiques. Taking her cue from her children, she has recently taken up karate and indoor sky diving. Helen and her husband now live in Hampshire with their three children and two dogs.

Hoping to get back into posting more regularly now I have my books back on shelves!
Happy Families by Julie Ma is the story of Amy who is 34 and has just
On the blog today is my review for The Authenticity Project by @clare_pooley which is read as part of a readalong from @adventureswithwords.
My bedroom is finished! And I have lots of glorious bookshelves (I've already filled them but let's not talk about that!)
I really enjoyed If I Can't Have you by @tinycharlotte29 which I recently read as part of a @tandemcollectiveuk readalong.
Last week I posted my review of The One Hundred Years of Lenni and Margot by Marianne Cronin.