Maddie has 3 children, two of them under 3 and is struggling. On the outside she appears to be coping running a horse sanctuary as well as being a good mum and wife to Lucas.  But she is exhausted – baby Noah suffers from colic and doesn’t sleep and she is also suffering with frightening memory losses.

But when baby Noah is found dead in his cot, she is soon under suspicion for his death.  While she is sure she didn’t do anything wrong, it isn’t long before she starts to suspect the people around her of hurting her baby and before long she feels as if she is loosing her mind…

As well as Maddie’s story, we delve back into the past to hear from Lydia.  Poor Lydia is neglected and terribly abused by both her mum and her male friends.  At the age of just 12 she does something truly terrible…

My goodness, this was a disturbing yet exciting read.  I had so much sympathy with poor Maddie who not only lost her child but also feels like she is going insane.  To go through something so terrible and not be able to trust the people around you must be awful.  I can clearly remember that exhausted feeling that comes with having very young children and it is not an easy time.

And poor Lydia  – I have no idea how anyone can treat their child in this way but I know it does happen.

It was obvious the two stories were going to come together at some point and I thought I was very clever and had guessed the connection quite early on but I was wrong!  I did guess another twist though but it didn’t lessen the enjoyment of the book.

Tess Stimson is a skilled writer.  The novel was fast paced, so much so that I picked it up at every opportunity.  There is no doubt there are some difficult themes in here, but this is a chilling read and I look forward to seeing what Stimson does next.

With thanks to Sabah at Avon Books for inviting me to be on the tour and supplying me with an ARC of the book.  Be sure to check out the other stops below… 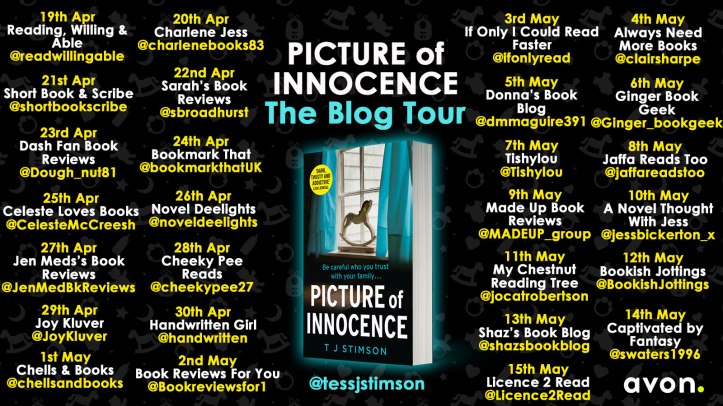 Tess Stimson is the British author of ten novels, including top-ten bestseller The Adultery Club, and two non-fiction books, which between them have been translated into dozens of languages. Her first “proper” job after graduating from St Hilda’s College, Oxford (where she read English) was as a news trainee with ITN (Independent Television News). She reported and produced regional and world stories, travelling to hotspots and war-zones all over the globe.
In 2002, she was appointed Professor of Creative Writing at the University of South Florida and moved to the US. She now lives and works in Vermont with her husband, Erik, their three children, and (at the last count) two cats, three fish, one gerbil and a large number of bats in the attic.

Today is Holocaust Memorial Day and people are being encouraged to light a candle to remember those who were murdered during the Holocaust in World War 2.
Do you like a puzzle? I love a Su Doku and a crossword so I was thrilled when @hqstories sent me this great bundle of Collins puzzle books to celebrate National Puzzle Day on 29th January!
On rhe blog today I've reviewed The Undiscovered Deaths of Grace McGill by C S Robertson.
We are up to P for the #alphalocalitystack challenge.
Had the absolute best time today in London, just me and my boys watching Hamilton! Have you seen it or are you a fan? It blew me away!
Something a little different today! I'm on the blog tour for Write It All Down by @writeitalldown_