Adélaïde Bon grew up in a wealthy neighbourhood in Paris, a privileged child with a loving family, lots of friends and seemingly limitless opportunity lying ahead of her. But one sunny afternoon, when she was nine years old, a strange man followed her home and raped her in the stairwell of her building. She told her parents, they took her to the police, the fact of the crime was registered…and then a veil was quietly drawn over that part of her childhood, and life was supposed to go on.

Except, of course, it didn’t.

Throughout her adolescence and young adulthood, Adélaïde struggles with the aftermath of the horror of that afternoon in 1990. The lingering trauma pervades all aspects of her life: family education, friendships, relationships, even her ability to eat normally. And then one day, many years later, when she is married and has a small son, she receives a call from the police saying that they think they have finally caught the man who raped her, a man who has hidden in plain sight for decades, with many other victims ready to testify against him. The subsequent court case reveals Giovanni Costa, the stuff of nightmares and bogeymen, finally vanquished by the weight of dozens and dozens of emotional and horrifying testimonies from all the women whose lives and childhoods he stole.

Goodness, this was a tough read.  Told mostly in the third person, this gives the impression that for the majority of the book, Adélaïde is almost talking about her life as if she is talking about someone else.  Her life is tough – she has a major road traffic accident at 15 and ends up needing lots of surgery.  She has eating disorders and  suicidal thoughts and is eventually diagnosed with P.T.S.D but has largely forgotten about the details of what happened to her when she was 9.

When she is 27 she attends a conference about sexual violence where a psychiatrist explains how the brain disconnects during a rape, how traumatic memory of the event is created and buried, and the massive consequences this has for the victim’s health, sexuality and social lives.  She doesn’t make the connection.

I found it fascinating the Adélaïde buried what happened to her so far down she almost forgot the event and how traumatic it was.  It is heart-breaking as the details come back to her. This memoir is brutally raw and unflinching  but I have so much admiration for her to be able to speak out about what happened and also the effects it had on her mental health.  An important, shocking and brave read.

Lots of other lovely bloggers are shouting from the rooftops about this book – please take a look at their posts too! Adelaide is appearing on BBC Radio 4’s Woman’s Hour today to discuss the book and her experiences. 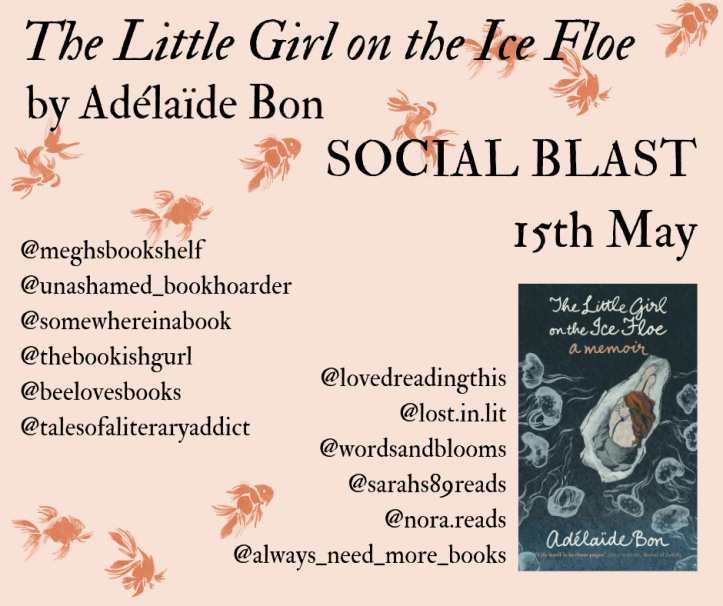 Many thanks to Katya at Quercus Books for sending me a beautiful copy for review.

Adélaïde Bon is a French writer, actress and voice artist. She is graduate of the École Supérieure d’Art Dramatique in Paris, and she has acted in state theatres and for television, and devised and performed in numerous shows in factories, trains, museums, and conferences. In parallel, she completed five years of training on issues of gender equality under the auspices of a feminist company partnered with the European Association Against Violence Against Women and the Mémoire Traumatique association led by Dr Muriel Salmona. She lives in Paris. The Little Girl on the Ice Floe is her first book, published in France in March 2018.

As we finally are coming to the end of the longest month in the history of forever, here are just some of the wonderful books published this month!
It's publication day for Becky by Sarah May and I've reviewed it on my blog today!
This time last week I was lucky enough to attend #4thestatelive at the amazing News International building!
On the blog today, I've reviewed Stone Blind by @nataliehaynesauthor.
I've seen this great tag around which was starred by @teawithalmondmilk called #tenbackthen.
Throwing my hat in the ring for the