Tom Hunter is a successful novelist – his first book was a major hit, his second not so much. Now he is being stalked by Evie, a young woman who he met at a book signing. Evie is well-read, clever but unstable. She lives with her father and her only interactions with the world appear to be through social media. She writes a blog and enjoys antagonising people on Twitter.

When she is taken to court by Tom, she is hit with a restraining order and her life is turned upside down. Tom on the other hand is free to return to writing, yet he is still anxious about Evie, despite the court ruling.

Told from both Tom’s and Evie’s points of view this is a cracking read. I literally polished this off in two sittings! Neither Tom nor Evie are very likeable. Although I had some sympathy for Tom, he doesn’t appear to be a very nice person, taking his only real friend Emma for granted. Evie is a sad character, having had an unhappy childhood with a mother who didn’t love her. But she also seems to be one of those people who like to argue for the sake of it and love to have disagreements.

It made me realise how having a stalker, even a remote one who targets their obsessive behaviour through social media and email can still have a devastating effect on someone’s mental health.

I never quite trusted what either character was telling me which added to the uneasy nature of this read. Tom’s paranoia really shone through and I felt quite anxious while reading this.

The beginning of the book is set in Tom’s home town of London and the second half is set in Hastings, where Tom decides to stay after the court case, in the hope a change of scenery will help him write another bestseller. I liked Tom’s unlikely friendship with his downstairs neighbour in Hastings – Colin, an elderly gay man. There are many mentions of homophobia both in the present (with Tom) and in the past with Colin and how even now, Tom doesn’t feel entirely comfortable making it obvious he is gay, always feeling a little vulnerable.

A current and believable read, I found this twisty and compelling. It really made me questions my own usage of social media! While I am on Twitter, I don’t tend to get into arguments! I’m very much about the books and bookish Twitter for the most part is just lovely and supportive but I am well aware of how quickly the tide can turn.

This was a dark and disturbing read, a twisty turny thriller that is a serious contender to be one of the best thrillers I have read so far this year!

Many thanks to Karen at Orenda for sending me a copy and to Anne Cater for inviting me on the blog tour.  Be sure to checkout the other stops below… 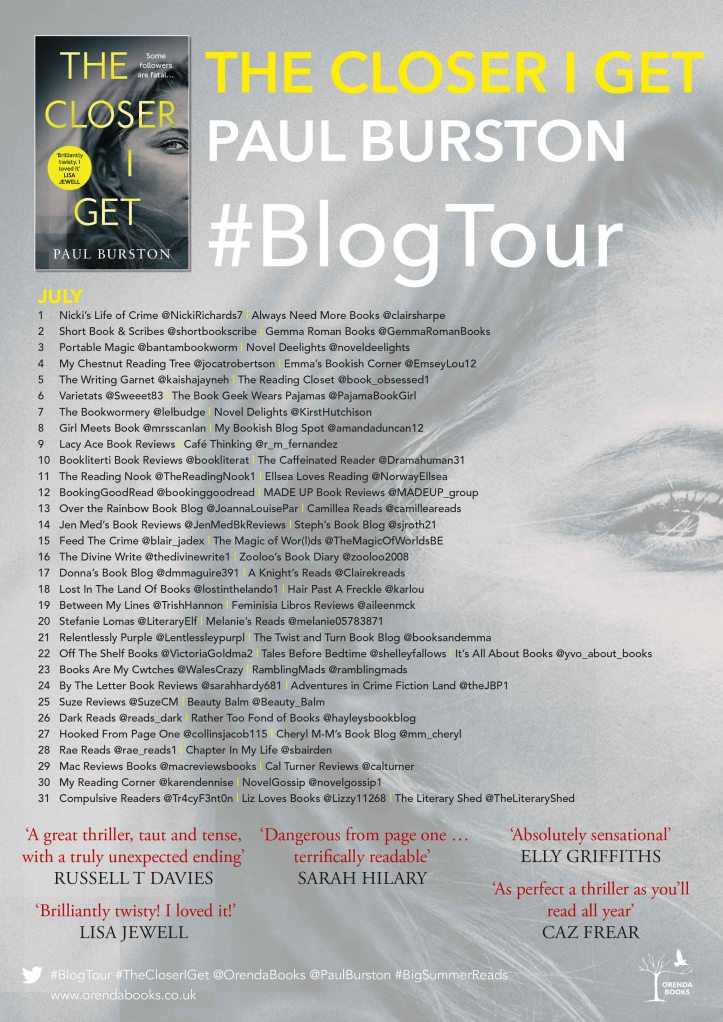 Paul Burston is a British journalist and author. Born in York and raised in South Wales, Burston attended Brynteg Comprehensive School and studied English, Drama and Film Studies at university. He worked for the London gay policing group GALOP and was an activist with ACT-UP before moving into journalism. He edited, for some years, the gay and lesbian (later LGBT) section of Time Out magazine.
His first novel Shameless, published in 2001, was praised by The New York Times.
He has since published four more novels and two short story collections. He is the founder and host of award-winning LGBT literary salon Polari at the Southbank Centre, and founder of The Polari First Book Prize for new LGBT writing.
In October 2018 The Bookseller announced that his new crime novel ‘The Closer I Get’ will be published by Orenda Books in 2019 as part of a two book deal.

After the terrorist attacks at the Bataclan in Paris in 2015, freelance journalist Stefania Rousselle was broken and depressed. She decided to go in search of love. She travelled around France recording all sorts of stories of love, and this wonderful book is the result of that road trip. ❤ The stories are short and beautiful and there are some wonderful pictures. I've picked this up on several occasions to read and ended up reading for longer than I intended. ❤ A beautiful collection, this is the perfect gift for Valentine's Day, a fascinating peek into other people's lives! ❤ Thank you so much to Hannah at @vikingbooksuk for my #gifted copy as part of the bookstagram tour. ❤ With special thanks to my son @tommadethis who designed and decorated the hearts for me! ❤ @stefaniarousselle #amour #howthefrenchtalkaboutlove #coffeetablebooks #stefaniarousselle #amourbook #booksaboutlove #roadtripphotography #valentinesday #loveislove #france #docubooks
It's been a long time since I was classed as a "young adult" 😁 but it doesn't mean I don't enjoy a good YA read! These are some of my favourite YA authors...who are yours? I'd highly recommend all of these authors! #beautysleep #kathrynevans #lauradockrill #bigbones #elockhart #genuinefraud #patrickness #therestofusjustlivehere #afterthefire #willhill #askingforit #louiseoneill #thehateugive #angiethomas #ifistay #gayleforman #one #sarahcrossan #brianconaghan #theweightofathousandfeathers #yafiction #youngadultbooks #youngadult
My first readalong with @tandemcollectiveuk! I've been wanting to read The Other Half of Augusta Hope by Joanna Glen for sometime! Day 1 is tomorrow if you want a grab a copy and take part! The schedule is Day 1 - start to page 75 Day 2 - page 76 to 152 Day 3 - page 153 to 225 Day 4 - page 226 to 291 Day 5 - page 292 to end If you want any of the question prompts, drop a DM to @tandemcollectiveuk and they'll send you a copy! @alicespake @zubscovered @thehalcyondaysofsummer @pillow_books @nobooksgiven @mrscookesbooks @elizas_everyday @bookbeforeuleap @frinsreads @reading_with_nessie @asarahcarter @silverliningsandpages @lj_reads @fictionandfairylights @bookworm1346 @contraryreader @agirlwithherheadstuckinabook @becky_and_the_books @a_never_ending_story_ @anniethebookslayer @thatbookgal @dressedtothemax @mrsfegfiction @behindthewoman @booktiamo @theemilychapters @inthemumstyle @reading_for_my_mind @__stephloves @abookloversdiary @wearethecuriousbookclub @cen_sational_reads @the_pufflehuffle_kitteh @shortbookandscribes @bookandstitch @booksandbargains_ @nightfallmysteries @thelibrary_isopen @theroamingreader @bookie_mama_bear #augustahope #readalong #augustahopereadalong #theotherhalfofaugustahope #joannaglen #orangebooks
Today is my turn on the #bookstagram tour for Haven't They Grown by Sophie Hannah. Being nosy one day, Beth ends up outside the house of her former best friend, Flora. While parked outside the gated property, she sees Flora get out her car, followed by her two children, Thomas and Emily. But it has been 12 years since Beth has seen the family. And Thomas and Emily are the same age they were when she last saw them. How can that be possible? Why haven't they grown? What an intriguing premise for a story! This turned out to be a detective novel of sorts...Beth is determined to find out the truth, aided by her family but especially her sassy teenage daughter Zannah. I had no idea where this book was going. There are a whole cast of characters who try and put Beth off the scent but she doesn't give in and I really enjoyed this book. This is my first Sophie Hannah and I admire the imagination used to write this story, which is very much set in the real world. Thank you to @paper.charm for inviting me on the #bookstagramtour and for my #gifted proof copy. Swipe through to see who else is taking part over the next few days! #haventtheygrown #sophiehannah #psychologicalthrillers #booktours #papercharm #bookstagram #bookblogger #bookreview #mysterybooks
I may have bought myself another edition of Little Women. Isn't this the most beautiful book? When I saw it I couldn't resist! Published by Thomas Nelson, this edition is part of their Seasons Edition - Winter collection and the cover is laser cut and is just stunning! Limited to a 10,000 print run, I'm looking forward adding this to my Little Women collection! #littlewomen #louisamayalcott #collectorsedition #collectablebooks #bookcollector #bookcollections #beautifulbooks #lasercutting #limitededition #childrensliterature #seasonseditions
It's been a while since I've read a Dorothy Koomson book - isn't it great to return to an author you enjoy? In Tell Me Your Secret, the police are investigating a kidnapper, targeting black women. Known as The Blindfolder, he was active 10 years ago - he held his victims for 48 hours and if they kept their eyes shut, while being abused and tortured for the entire time he let them go. Now he is back and killing the women he let go years ago. A great crime thriller set in Brighton, what was really interesting was how the perception of victims is different depending on their race. A young black woman, especially one who drinks or takes drugs is less likely to believed when reporting a crime than a white woman. Less gritty than some crime thrillers (a lot is left to the imagination), I really enjoyed this! Out in paperback now! Full review is on the blog (link in bio). Thank you to @ed.pr and @headlinebooks for my #gifted copy. #tellmeyoursecrets #dorothykoomson #crimethriller #womenofcolorauthors #brightonbooks #booksoutside #booksbythesea #bookblogger #bookreview