In a high end apartment block in central London live Lexie and Tom.  Lexie loves her flat and her life with Tom, but after suffering a miscarriage, is desperate for a baby.

Next door lives glamorous party animal Harriet a successful composer and musician who loves throwing parties for her work colleagues.

Lexi is finding her fertility issues totally overwhelming and when she starts noticing things being moved in the flat, Tom is convinced she is going mad.  But Lexi knows someone is watching her…

And someone is…because Harriett has set her eyes on Tom (who reminds her of her ex-finance Luke) and believes that Lexi doesn’t deserve the perfects life she appears to have.  She sets on a path of destroying Lexi so she can take Tom for herself.

I really enjoyed this psychological thriller. Harriet is a great bad guy – a complex character, whom one minute you feel sorry for, while and the next you feel scared of!  Having been left heartbroken by her ex fiancé (who was a real piece of work) and estranged from her family who live in America, she spends her evenings drinking and partying. Once she sets her heart on having Tom, she is quite clever in her methods of patiently trying to destroy their relationship by trying to drive Lexi mad.

Heavily focusing on social media, both women stalk each other through Facebook and Twitter, looking at each others photos and status updates, both convinced the other is living a wonderful life.  But we the reader know that both women have problems and their perfect social media updates are the filtered version of their actual lives.  Another social aspect covered is the role of neighbours – despite being in an apartment building and living next door to each other, Harriet and Lexi have never met. In fact it appears that everyone almost goes out of their way to avoid any interaction with their neighbours!

Through the Wall was well paced and the characters were realistic.  There were no great surprises for me – it kind of went in the direction I was expecting but that was OK because it was well written and I was still hooked.  A great suspenseful psychological thriller centred around obsession and jealously!

With thanks to Sabah at Avon Books for inviting me to be on the tour and supplying me with a copy of the book.  Be sure to check out the other stops below… 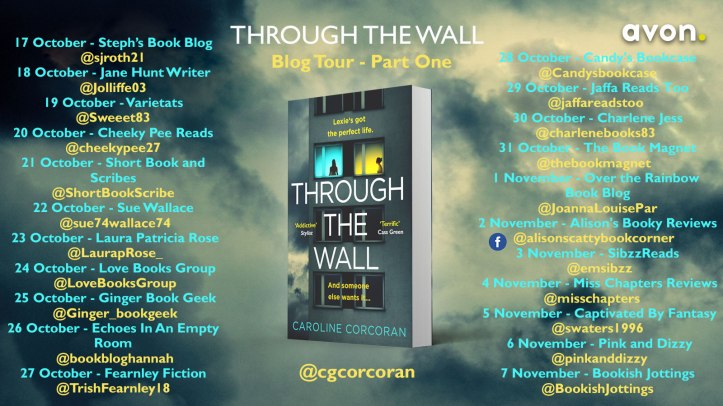 Caroline Corcoran is a freelance lifestyle and popular culture writer and editor with 15 years experience.  She has worked for most of the top magazines, newspapers and websites in the country, and also as a  copywriter for brands and websites. After 14 years in London, Caroline recently returned up north to the Wirral to have a baby.

We are up to L in the #alphaactivitystack from @puellalegit and today it is all about LOVE!
My latest review on my blog is a future release! We All Want Impossible Things by Catherine Newman is out 12th January 2023!
I've seen the tag #10beforetheend doing the rounds and thought it might help focus me on my reading for the rest of this year.
On the blog today I've reviewed The Christmas Wish by @lindseykelk.
My latest blog post is my review of Nobody But Us by Laure Van Rensburg, to celebrate paperback publication.
Two letters this week for the #alphaactivitystack challenge as I didn't have many books for J or K (and I'm also a bit behind!) Thanks to @puellalegit for this fun challenge!