I was lucky enough to be invited to an event with Penguin in September last year in which they championed the upcoming releases they were excited about and Dear Edward was one that stood out for me.

In June 2013, a flight takes off from New York to Los Angeles.  There are 192 people on board and the book focuses on just a few passengers including a young woman taking a pregnancy test in the plane toilet, a Wall Street Millionaire who is flirting with an air hostess and an injured soldier returning from Afghanistan.  Also on the flight are Jane and Bruce Adler and their sons Jordan and Eddie (Edward) – they are making a life changing move to Los Angeles so Jane can focus on her screenwriting career.

Tragically, the plane crashes in a field in Colorado and 191 people die – but against all odds, 12 year old Edward Adler survives.

The story is told mostly from Edward’s point of view as he comes to terms with the pain of his injuries at first and then the grief of what he has lost.  He goes to live with his childless aunt and uncle who are themselves suffering the grief of several miscarriages.  Almost immediately upon arriving he meets the girl next door, Shay and it is his relationship with her that enables Edward to continue to survive in his own way. It is a long journey for him and the book follows several years of his life after the events of the crash and he slowly recovers from his physical injuries and learns to live with what happened.

As well as following Edward we have flashbacks to the flight and we learn more about the small group of the passengers throughout the journey, which makes it all the harder knowing they died in the crash as I started to get involved in their stories.

This book was just superb.  I felt so emotional throughout.  Poor, poor Edward.  I felt for him as a mother to a 12 year old son myself, imagining how my son would be without the rest of his family to support him.  Edward and his brother Jordan have a particularly close relationship having being home schooled together their whole lives, and it his loss that Edward feels most.  The mental anguish he suffers is heart-breaking.

The crash itself isn’t sensationalised – but is terrifying never the less.  Being in the cockpit with the pilots as they struggle to bring the plane under control is horrific.  The author certainly seems to know her stuff about airplanes and the technicalities of flying one and I am quite glad to not be going anywhere by air for a little while!

Beautifully written, I was close to tears many times reading this.  I thought it was just stunning!  I loved the relationship between Edward and Shay and I loved how their relationship grew as the book progressed.  My first 5 star read of the year, this is not an easy read but is ultimately a story about kindness and it will stay with me for a long, long time.

Thank you so much to Hannah from Penguin Viking for inviting me on the tour and for sending me a copy of the book.  Be sure to check out the other stops on the tour! 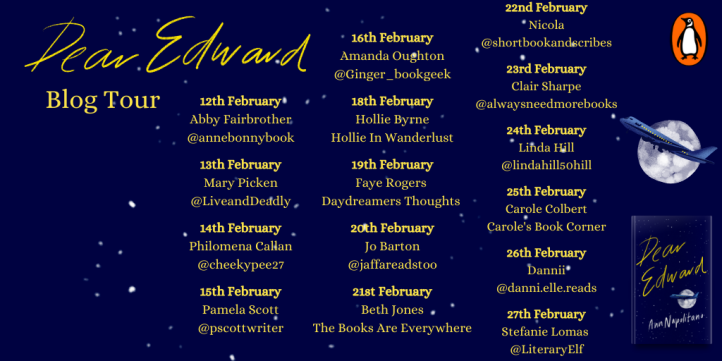 On 18th February I was lucky enough to be invited to the Penguin offices on The Strand  for an afternoon tea with Ann Napolitano!  We were treated to prosecco, sandwiches and cakes and got to listen to the story of how Dear Edward came to be.  It took 8 years to write and was inspired by the Libya plane crash in 2010, when just one 10 year old boy survived out of 104 passengers and crew.

It was great to listen to her talk and to meet her after and have our books signed.  And a real treat to be in the Penguin offices and meet some new (and old) book blogging friends!

Ann Napolitano is the author of the novels A Good Hard Look and Within Arm’s Reach. She is also the Assistant Editor of One Story literary magazine. She received an MFA from New York University; she has taught Creative Writing for Brooklyn College’s MFA programme, New York University’s School of Continuing and Professional Studies and for Gotham Writers’ Workshop. She lives in Brooklyn with her husband and two children.

Today on the blog I've reviewed The Girl in the Maze by Cathy Hayward.
We all know buying books and reading them are two very different hobbies 🤣 I recently decided to collect the Virago Modern Classics and I loved the cover of Excellent Women by Barbara Pym so treated myself.
Failed miserably on the #alphalocalitystack this week - the only location beginning with H that I could think of is Hogwarts!
Spotted over on @jatterbywarren24 and inspired by how quickly this year seems to be going by, here are six books with #timeinthetitle.
October is black history month so I thought I'd showcase some of the books I've read and loved by black authors.
Today on the blog I've reviewed Lemon by Kwon Yeo-sun and translated by Janet Hong.