Luke and his girlfriend Hannah have just had a baby and seem to have a pretty perfect life together. Hannah is an arts correspondent, while Luke works in the music industry and they both dote on baby Samuel.

But being adopted, Luke has always felt like an outsider and when Samuel is born he has an urge to understand who he is and tracks down his birth mother Alice. After having lunch together, things move quickly and soon Alice has met Hannah and they have both met Luke’s famous father, the artist Richard Fields. Alice quickly becomes engrained in the families life, and when Hannah needs to go back to work, Alice offers to look after baby Samuel. She is a godsend: Samuel adores her, and Alice obviously adores him in return. She cooks and cleans for them too and it all seems to be going well, apart from Luke starts to feel jealous of the attention Samuel gets and feels no nearer to having a proper relationship with Alice.

As well as from Luke, we go back in time to London 1972 where a teenage Alice is a talented artist at the Slade art school. With her gay best friend Rick one night she goes to see an up and coming band and attracts the attention of lead singer Jacob, who is interested in her as a potential artist for the band’s next album cover. Before long they are in a relationship and madly in love with each other.

I remember there being a lot of positive reviews around Empson’s debut thriller Him last year so when the blog tour for Mine came up, I jumped at the chance to take part. What surprised me most about this is the emotion attached the characters – although marketed as a thriller it is so much more.

Reading about the lasting effects adoption has on both the child who feels they never entirely belong and the mother who never truly gets over the loss of their child is heart-breaking. When an adopted child meets their birth mother for the first time, especially when both parties want the meeting to go ahead can still be a difficult meeting for both. Empson incorporates textbook snippets about adoption at the beginning of each of Luke’s chapters that mirror the stages he is going through.

Luke feels Alice is evasive about what happened and why she gave him up – he wants answers and Alice is unable to give them. He feels jealous over Alice’s relationship with Samuel and feels bad for feeling like that.

So much more than a typical psychological thriller, I was surprised at the depth of emotion portrayed throughout, both in the feelings of Alice and Luke, but it also looks with sensitivity at characters’ mental illness, which felt realistic. Mine was inspired by Clare’s husband finding his birth mother, and the difficulty in navigating a relationship with a biological parent, who is also a stranger.

A great read, I polished this off in just a couple of days. Empson has written a book of many layers that is completely enthralling.

Many thanks to Tracy Fenton for inviting me on the blog tour and to Orion for sending me a proof copy! Be sure to checkout the other stops below: 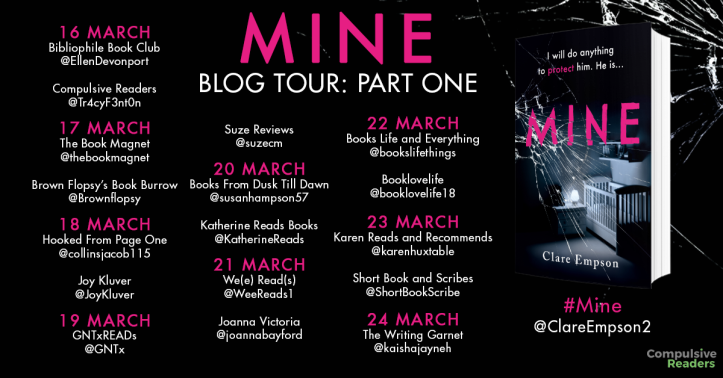 Clare Empson is a journalist with a background in national newspapers and has worked as a small business editor, finance correspondent and fashion at the Mail on Sunday and the Daily Express. Clare freelances for The Sunday Telegraph, The Sunday Times, the Evening Standard and Tatler among others. She currently works as editor / founder of experiential lifestyle website www.countrycalling.co.uk. Empson’s critically acclaimed debut HIM was published in April 2019.