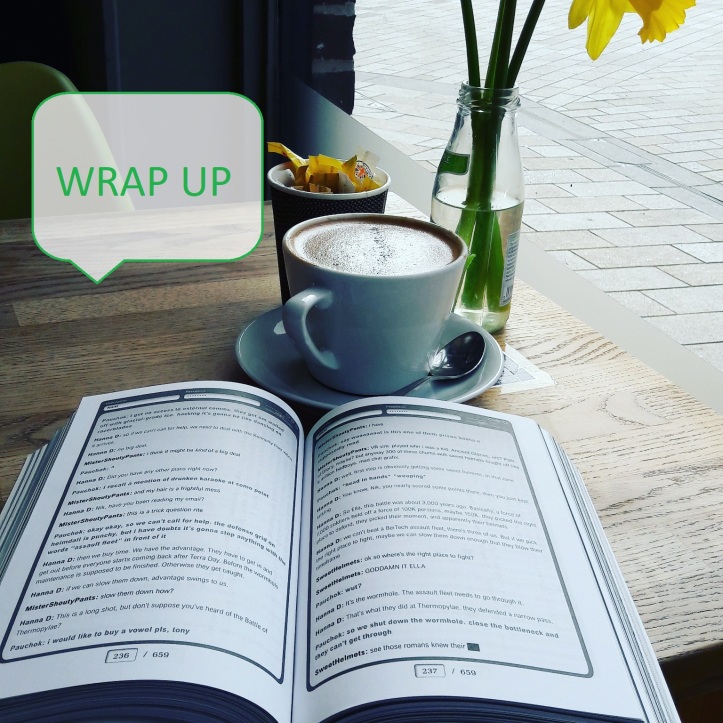 So how are you finding this new world we are living in?  It kind of feels normal to me now and luckily I have books! All the books! I read 9 books – and each and every one has been absolutely amazing!  I have never had a month quite like it with all the books being outstanding!

So what can you find in my wrap up?

I have decided to start including some stats on these wrap up posts to try and encourage me to keep my TBR in check!

Well I managed to reduce my TBR by 2 books! At least it’s going slowly in the right direction!  Mind you, that’s not counting Netgalley but no-one counts those do they? 🙂

Obviously there were no book events to attend this month but there have been loads of great online events and I managed to catch live events with Maggie O’Farrell, Beth O’Leary, Abbie Greaves, Beth Morrey & Clare Pooley! I have discovered https://twitter.com/IAmInPrint this month and I would highly recommend them for author events!

Wrap Up (all titles are links lead to my reviews)

Mine by Clare Empson

‘Who am I? Why am I here? Why did my mother give me away?
On the surface, Luke and his girlfriend Hannah seem to have a perfect life. He’s an A&R man, she’s an arts correspondent and they are devoted to their new-born son Samuel.
But beneath the gloss Luke has always felt like an outsider. So when he finds his birth mother Alice, the instant connection with her is a little like falling in love.
When Hannah goes back to work, Luke asks Alice to look after their son. But Alice – fuelled with grief from when her baby was taken from her 27 years ago – starts to fall in love with Samuel. And Luke won’t settle for his mother pushing him aside once again…

How did I get it? Received a proof copy for a blog tour.

Warwickshire in the 1580s. Agnes is a woman as feared as she is sought after for her unusual gifts. She settles with her husband in Henley street, Stratford, and has three children: a daughter, Susanna, and then twins, Hamnet and Judith. The boy, Hamnet, dies in 1596, aged eleven. Four years or so later, the husband writes a play called Hamlet.
Award-winning author Maggie O’Farrell’s new novel breathes full-blooded life into the story of a loss usually consigned to literary footnotes, and provides an unforgettable vindication of Agnes, a woman intriguingly absent from history.

How did I get it? I received a finished copy for a blog tour.

Rainbow Milk is an intersectional coming-of-age story, following nineteen-year-old Jesse McCarthy as he grapples with his racial and sexual identities against the backdrop of a Jehovah’s Witness upbringing and the legacies of the Windrush generation.
In the Black Country in the 1950s, ex-boxer Norman Alonso is a determined and humble Jamaican who has moved to Britain with his wife to secure a brighter future for themselves and their children. Blighted with unexpected illness and racism, Norman and his family are resilient in the face of such hostilities, but are all too aware that they will need more than just hope to survive.
At the turn of the millennium, Jesse seeks a fresh start in London – escaping from a broken immediate family, a repressive religious community and the desolate, disempowered Black Country – but finds himself at a loss for a new centre of gravity, and turns to sex work to create new notions of love, fatherhood and spirituality.

How did I get it? I received a finished copy from Dialogue Books.

Greta Gale has played the part of the funny fat one her entire life, hiding her insecurities behind a big smile. But size doesn’t matter when you can laugh at yourself, right?
Until Greta realises she’s the only one not laughing. And deep down, she’s not sure if she’ll ever laugh again.
But when an unexpected road trip takes Greta from her home in Dublin to the bright lights of Vegas, she begins to question if you need to be the perfect size to love yourself. Or to fall in love. Because sometimes the best moments in life come when it’s all gone a bit pear-shaped…

How did I get it? Received a proof copy for a blog tour.

They’re a glamorous family, the Caseys.
Johnny Casey, his two brothers Ed and Liam, their beautiful, talented wives and all their kids spend a lot of time together – birthday parties, anniversary celebrations, weekends away. And they’re a happy family. Johnny’s wife, Jessie – who has the most money – insists on it.
Under the surface, though, conditions are murkier. While some people clash, other people like each other far too much . . .
Everything stays under control until Ed’s wife Cara, gets concussion and can’t keep her thoughts to herself. One careless remark at Johnny’s birthday party, with the entire family present, starts Cara spilling out all their secrets.
In the subsequent unravelling, every one of the adults finds themselves wondering if it’s time – finally – to grow up?

How did I get it? I bought a copy.

Every child’s potential is regularly determined by a standardized measurement: their quotient (Q). Score high enough, and attend a top tier school with a golden future. Score too low, and it’s off to a federal boarding school with limited prospects afterwards. The purpose? An improved society where education costs drop, teachers focus on the more promising students, and parents are happy.
Elena Fairchild is a teacher at one of the state’s elite schools. When her nine-year-old daughter bombs a monthly test and her Q score drops to a disastrously low level, she is immediately forced to leave her top school for a federal institution hundreds of miles away. As a teacher, Elena thought she understood the tiered educational system, but as a mother whose child is now gone, Elena’s perspective is changed forever. She just wants her daughter back.
And she will do the unthinkable to make it happen.

How did I get it? I received a proof copy from HQ Stories

After seven years as an assistant, 29-year-old Evie Summers is ready to finally get the promotion she deserves. But now the TV and film agency she’s been running behind the scenes is in trouble, and Evie will lose her job unless she can convince the agency’s biggest and most arrogant client, Ezra Chester, to finish writing the script for a Hollywood romantic comedy.
The catch? Ezra is suffering from writer’s block–and he’ll only put pen to paper if singleton Evie can prove to him that you can fall in love like they do in the movies. With the future of the agency in jeopardy, Evie embarks on a mission to meet a man the way Sally met Harry or Hugh Grant met Julia Roberts.
But in the course of testing out the meet-cute scenes from classic romantic comedies IRL, not only will Evie encounter one humiliating situation after another, but she’ll have to confront the romantic past that soured her on love. In a novel as hilarious as it is heart-warming, debut author Rachel Winters proves that sometimes real life is better than the movies–and that the best kind of meet-cutes happen when you least expect them.

How did I get it? I was sent a proof copy from Trapeze

Lauren Pailing is born in the sixties, and a child of the seventies. She is thirteen years old the first time she dies.
Lauren Pailing is a teenager in the eighties, becomes a Londoner in the nineties. And each time she dies, new lives begin for the people who loved her – while Lauren enters a brand new life, too.
But in each of Lauren’s lives, a man called Peter Stanning disappears. And, in each of her lives, Lauren sets out to find him.
And so it is that every ending is also a beginning. And so it is that, with each new beginning, Peter Stanning inches closer to finally being found…

How did I get it? I bought a copy

Jude’s life is upended when his mother loses her job and moves them to a little town by the sea to live with Henry Lake–an eccentric old man with rooms to rent. Henry is odd, the town is dull, and worst of all, Jude feels out of place and alone.
So when Novo turns up in the house across the street, dressed all in black and looking unbearably handsome, Jude’s summer takes an immediate turn for the better. But Novo isn’t all that he seems to be–or maybe he’s more than Jude can possibly understand. Novo is a time traveler, someone who wakes up in different places and at different points in time with utter regularity. He knows that each Now is fleeting, that each moment is only worth the energy it expends on itself, and that each experience he has will be lost to him before long.
But Jude and Novo form a bond that shifts reality for both of them. Unlike anything he’s ever experienced, Jude begins to question what forever really means–only to find out that Novo knows that forever isn’t real. And when things go horribly wrong, he and Novo are faced with an impossible question that may change both of their lives irreparably–what is worth sacrificing for love?

How did I get it? I was sent a finished copy as part of a readalong

To save this time this month (so I can actually publish this on time), I am just posting a about a few of the films I’ve watched this month and enjoyed!  We got to the end of The Lord of the Rings films – I’m glad I finally watched them!  I also enjoyed a couple of films based on true stories, Hidden Figures and I, Tonya which were both amazing!  We got Disney Plus as well (like everyone else in the world) and I’ve enjoyed watching some films with my son – Coco especially was amazing and we have also enjoyed The Muppet Movies and Wall-E.

A whole month in lockdown.  I thought I would read more than usual but I am at much the same level.  I’ve been working from home and often end up working longer hours as I don’t have to “go home”.

I’ve missed going for a Sunday coffee with my husband, seeing my friends and my trips to London to see bookish friends and attending events.  I’m not getting as much book post but I still don’t seem able to make much of a dent.  I did buy my first kindle this month as the app was doing my head in.

We have been blessed with good weather for the majority of April so I have been on lots of walks with my sons. We are lucky enough to live near a river and the sea which do wonders for my mental health!

Hope you are well and are reading lots of wonderful books.  Have we shared any of the same books this month?

As we finally are coming to the end of the longest month in the history of forever, here are just some of the wonderful books published this month!
It's publication day for Becky by Sarah May and I've reviewed it on my blog today!
This time last week I was lucky enough to attend #4thestatelive at the amazing News International building!
On the blog today, I've reviewed Stone Blind by @nataliehaynesauthor.
I've seen this great tag around which was starred by @teawithalmondmilk called #tenbackthen.
Throwing my hat in the ring for the