“On a cold Sunday evening in 1957, Sarah Dewhurst waited with her father in the parking lot of the Chevron gas station for the dragon he’d hired to help on the farm.”

What an amazing opening line!

Burn is set in 1957 at the height of the Cold War in the fictional town of Frome, Washington, in a world where talking dragons are real and live in an uneasy peace with humans.  Sarah’s dad has hired a dragon to help clear some of their farm so they have more land upon which to grow things – the dragon that turns up is a rare Russian blue dragon known as Kazimir.  Sarah is instructed to stay away from the dragon but finds herself drawn to it nonetheless.

Sarah is of mixed race and her mother has recently died.  Her boyfriend Jason is of Japanese descent – they are drawn to each other being the only non-white teenagers in their school. One evening when they are meeting in secret they are found by  local bigot Deputy Kelby who starts to threaten them.  Kazimir interrupts and saves them.  He informs Sarah she is part of a prophecy, a prophecy in which she saves the world.  Not only that, there is an assassin on his way to kill her!

Meanwhile, Malcolm, the assassin, just a teenage boy himself is travelling towards Sarah – he is what is known as a believer, a member of a cult who devote their lives to dragons and believe that they are the superior beings and that humans should bow to them.  He worships the Mitera Thea “Mother Goddess” in Greek who has sent him on his quest.  Along the way he meets Nelson, who has been thrown out of his home for being gay.  Together they are being chased by two FBI agents who are investigating the group.

I don’t want to say anymore as I don’t want to give anything away but I urge you to read this because it is just so good. It is set against the backdrop of the Sputnik Crisis at the height of the cold war when there was real concern of the Russian’s using satellites to spy. In Burn, Patrick Ness features the people who are usually missing from 1950s US culture – and the discrimination they experienced even from people of authority. Racism and homophobia are rife. He is great at doing fantasy which is very much grounded in the real world.  It didn’t even feel that surprising that dragons are real and people accept them.

There are several points in the book where I was simply left with my mouth open, shocked with the way events were turning out and I literally couldn’t put it down.  There were so many “wow” moments! Ness is one of my favourite YA authors – he has the talent for beautiful writing, good characterisation and a great plot all at the same time.  There is lots of action but also several tender love stories happening, including a gay romance. These are the sort of books older teenagers and young adults should be reading!

Thank you to Tandem Collective for inviting me to take part in the readalong over on Instagram and to Walker Books YA for my gifted copy.

Other Patrick Ness books I have read and enjoyed include: 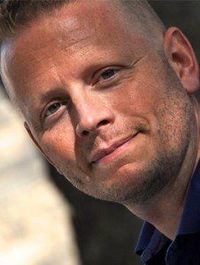 Patrick Ness, an award-winning novelist, has written for England’s Radio 4 and Sunday Telegraph and is a literary critic for The Guardian. He has written many books, including the Chaos Walking Trilogy, The Crash of Hennington, Topics About Which I Know Nothing, and A Monster Calls.

He has won numerous awards, including the Guardian Children’s Fiction Prize, the Booktrust Teenage Prize, and the Costa Children’s Book Award. Born in Virginia, he currently lives in London.

I'm jumping on the #bookfriendsbookmas book challenge and today it is book and blanket.
How about a #sixbooksaboutbooks challenge?
Thank you so much @bookbreakuk for this surprise box of gifts! This absolutely made my day!
Posting my #alphalocalitystack today created by @puellalegit and I'm up to M.
My most recent blog post was about a book I haven't seen much on here but absolutely loved, The Coward by Jarred McGinnis.
On Wednesdays we read pink! And also wear pink it seems!